We've gone to the Dogs around here.

Whew. It's been nice not going anywhere or doing anything. I've been exhausted and trying to regroup.  I think I'm almost back to normal. Well okay as normal as I can be.  Wednesday (11/2) we had to take Bruno to the vet for some shots. I rode a long. We all walked over to the kennels where the lost and found dogs are. There was one pretty guy but he was a boy and very noisy. Geez. But there was a sweet little girl on the end with sweet eyes and she was quiet but attentive. She wasn't available for adoption until Thursday. 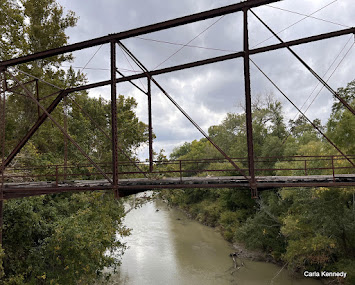 Thursday 11/3,  David took me to lunch at Hecho en Texas in Cameron. The BBQ was good. I'd go back. Then we went to vote. It's so much easier to vote early. Then we drove through the country. David wanted to show me the Cameron garden and some other sights he found while I was gone.  Driving we found this old bridge. Pretty cool looking but my photo doesn't do it justice. It had a cactus growing on it.

After this we went to check out the girl dog at the kennel and we were too late. Someone adopted her first thing that morning.

Sunday 11/6, after David helped Kaleb with some furniture hauling, David and I went to look at a playmate for Bruno.  David saw a post for a part Lab and Australian Shepherd that needed a home. She was a pretty girl.  Guess what Bruno has a playmate, her name is Sadie. She's adorable. While Bruno likes a playmate he's like the older sibling who got a baby sister and wants to know when it will go home.  He doesn't like having to share his humans, their love or attention, And he doesn't like to share his toys. LOL The toys have been at the house for 10 years+ but they're his.

This is Sadie in her 10x10 kennel where she was living. And her in the car coming home with us to her forever home. 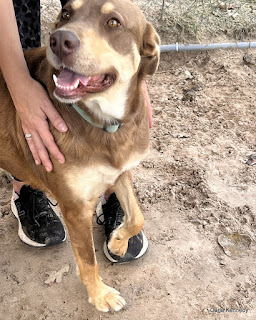 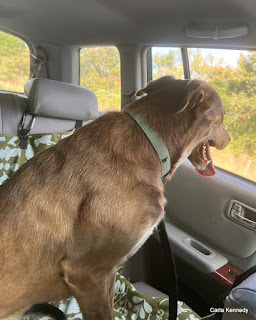 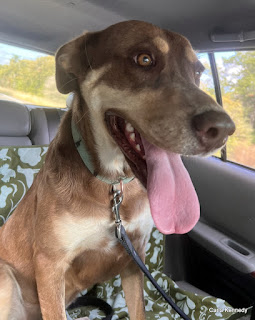 And it's meeting time with Bruno and let's play. 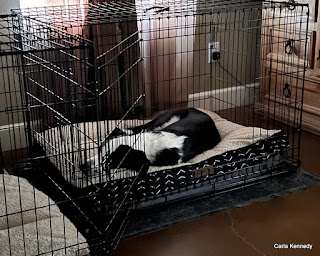 David went and bought Sadie a kennel and both of them got soft cushions to sleep on. Bruno found the new bed and opened his cage and decided to take a nap.
Then it was time to help their furless Dad build his work bench and give their approval. 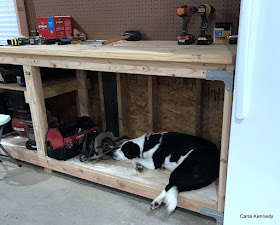 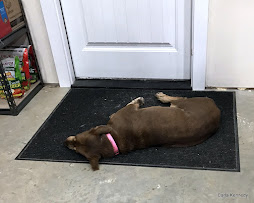 A day or two later Bruno took Sadie on a tour of the property. All 14 acres. When they came in they were were tired and this is how they napped.  I think they like each other but Bruno does not want to share his furless parents attention or his toys. Maybe in time he'll learn to share.  Lol.  Never a dull moment.  Sadie has proven to be a good girl in the house. She knows how to sit. The other night we heard a scratch at the door and then a bark. It was Sadie letting us know she was ready to come back in.  That's what Lilley used to do. They seem to like each other. LOL 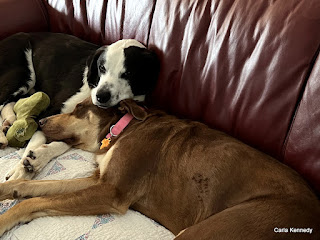 Friday (11/18) it was time to get out and about. We needed to pick up our wine from Texas Legato and we needed lunch so off we went. First stop was at The Gin on Nolan Creek. Yummy food and nice view if you sit on the patio which we did. It was enclosed and the heater was on. Thank goodness. I got their Brisket Quesadillas and David got the black and blue burger. 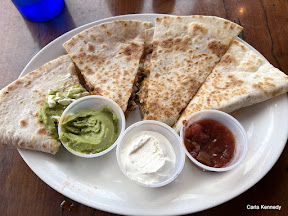 I had leftovers of course. 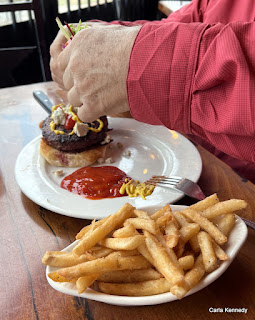 I tried to get a picture of the creek running in the background but my head ended up right where the little rapids showed up. Oh well. I tried. 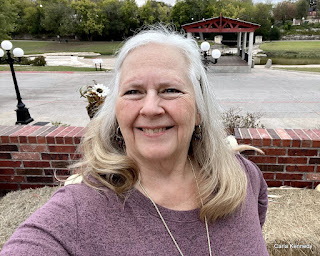 Next stop was at Legato. While there we had some wine. We got a free glass each. I had them pour me a tasting size glass of wine.  One of their little & newest winery pup came in to play and greet us.   Bandit says "HI"  He's a painted Yorkie I think they said. He loved rough housing with David. 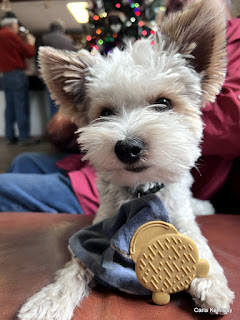 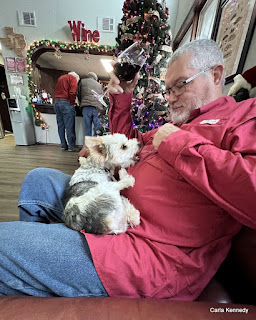 After hanging out here talking with the owners and staff we headed to The Vineyards of Florence in Florence. Texas that is. Really a pretty place. David ordered a glass and I got a flight for tasting.  I drank the Rose and the Port. The other two were good but I liked the last two best.  It might have gone to my head a bit. 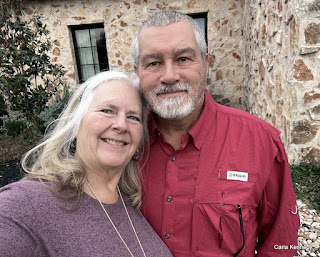 From here we headed home.
Saturday (11/19) David had to be home for the guys that were coming to clean out/off all the dead trees at the bottom of the property. He was worried that it wouldn't take much of a spark from the train track behind the property to start a fire. Plus he found out 2 of our trees on the East fence line were dead.
I took off to the Woodlands to celebrate Kaleb's twin boys 3rd birthday. Yep Pamela's man has twins. Killian the little red head and Braxton the blonde love their Aunty Sarah. 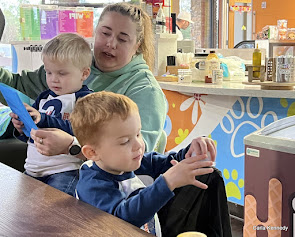 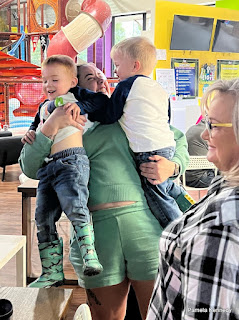 They have the same silly smile.  Pamela told Kaleb she wanted to see teeth when he smiled.  LOL 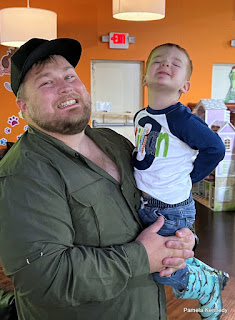 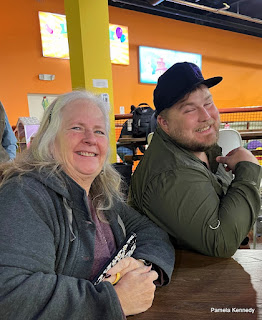 Today David took me down to the bottom of the north pasture to show me how much they cleaned up. Holy cow! This is where the cows used to hide in the trees and vines when we first got them.
We currently have 2 burn piles in the bottom north pasture and one being made in the east pasture by our fence line.  2 huge trees were dead and threatening the fence so they had to come down too. 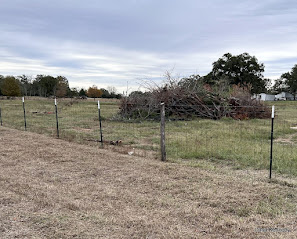 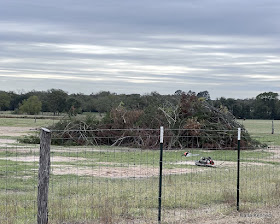 This is how the bottom area looked when we first got the cows. You couldn't drive through because of all the trees and vines but so many of them have since died due to the lack of rain. 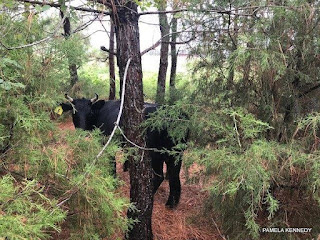 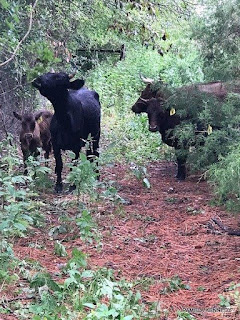 You can kinda see some of the dead trees past the cows. 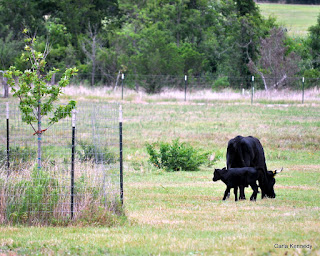 But this is how it looks now. 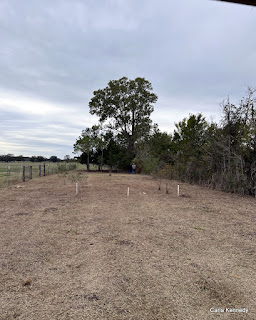 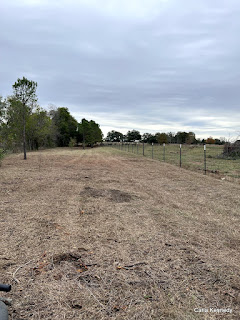 There is a fence separating our property from the railroad but there were areas of the fence that the wild hogs could get under so we built a fence out in front of it to keep the hogs off our property. It was cheaper than ripping down the old fence and pulling out the vines and trees that have grown into the fence. Now the area is cleaned off I wish we could move the new fence back several feet.  Oh well. We'll be planting some new trees down there to buffer the noise from the highway and the railroad. It's gonna be our nature preserve area of sorts.
Gotta stop for now. Need to finish some quilt projects and go to the post office.
Until next blog...At some point you just have to let go of what you thought should happen and live in what is happening
Happy Reading, Quilting or whatever makes you happy.

Y’all have been seeew busy. Kalebs littles are sew cute. Sew glad your fur babies love each other, they are sew sweet.
Loves ya
donna 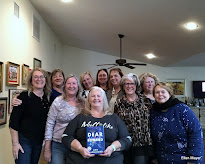