Pain or Relief that is the Question 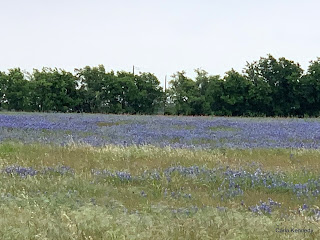 David and I were out and about and found this huge field of blue bonnets. We were thinking they were starting to die off but not here.

My week started off with David officially retiring. Yahoo! And then the began the fun.  Continue to go to Physical Therapy. Doing gym work instead of aquatic since for almost 2 weeks the pool heater was broken and the water was really cold. And surprising enough doing the actual gym did not cause any extra pain. And after Friday I won't be allowed to do aquatic therapy anyway.

Friday (4/16) arrived. My knee procedure was supposed to be at 1:30pm and then it was move to 10am and the day before it was moved to 7am at a different location because the one in the Woodlands became unsterile.  What 7am!?? Umm can I have one at a different later time. Holy crap that means we have to leave our house by 4:30am to get to Humble by 7am. So much fun. NOT! We got there at with 12 minutes to spare. The next 40 minutes was spent filling out papers and then they took me back and David stayed in the waiting area. The next hour was not fun. My veins said nope you're not touching me and disappeared.  They poked me several times and slapped my arms trying to get my veins to pop up. All this left me bruised. 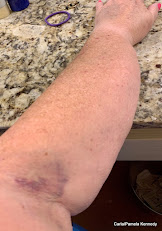 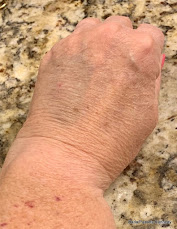 More bruising showed after these pictures. Not that I was surprised.  After they finally found a tiny vein and it held the IV I was wheeled back to the surgery room. Where I gave the doctor a bad time about lying to me... telling the prior injections would only be a pinch and burn. So I asked about the procedure and he said I shouldn't feel anything. Of course I said I don't think I believe you.  They gave me the injections to start deadening the area which hurt like HELL! 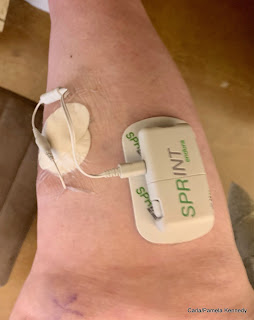 Finally some relief and I only felt uncomfortable pressures. Then it was over and I had a new piece of leg jewelry but my leg wouldn't keep bleeding. Great. Took a while but it finally stopped. This whole time poor David was sitting out in the waiting room wondering why a 30 minute procedure was lasting 2 hours. No one had gone out to tell him the first hours was spent trying to a vein for the IV and the 30 was spent getting the bleed under control before they could release me. When the surgery center called for a brief survey I let them know how unfair it was to keep a loved one in the dark and letting their imagination go on it's own.
Walked from the wheel chair to the car wasn't bad at all but I couldn't walk totally normal.
On Wednesday 4/21 I headed to PT and about half way there I got so sick. I felt like I was almost high but every time I breathed I wanted to barf. The only thing I did different was take 2 new pills from the nutritionist.  It was horrible. I refuse to take them again. I suffered through the PT and then..... I got my 2nd Covid vaccine.  I kinda slept the rest of the day after that.  On Thursday we met the Sprint PNS rep in Brenham so she could show David how to change the bandage on wire insert over the nerve.. There is a wire inserted in my knee to block the nerve sending the message to my brain that I'm in pain. The pack on the right side of the picture is a battery that sends electric impulses continuously to the area. Crazy huh? I have to really concentrate on my walking to walk normal without a limp or wobble. I haven't had the pain when I walk so that's a win but the swelling makes uncomfortable/weird. But hopefully with time that will all ease up. We'll see. I felt fine most of the day so I suggested we take a drive. 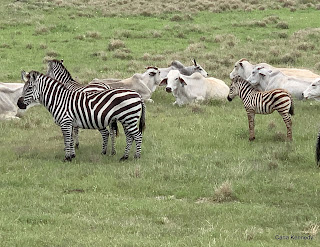 We left the rep and took a drive towards Warrenton. We drove by an area we seriously considering buying to build house and checked out all the new build on our drive. We were driving along and I was about to say what kind of cow is that and stopped.  It wasn't a cow! It was zebra's and one was a a baby zebra. This was so crazy to see Zebra's in there with these cows.  And then I saw the baby calf. 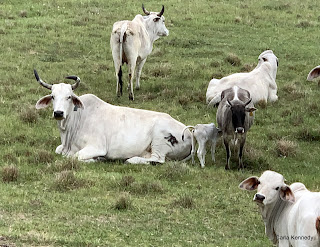 It would never turned around because he/she was a hungry little guy or gal. It was so little up against these big ole cows.  And this big gal was very interested in what I was doing. 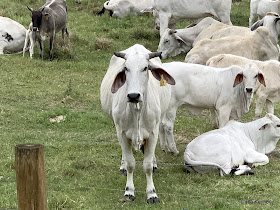 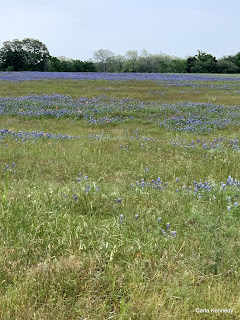 And we drove on down the road and found the field of blue bonnets. 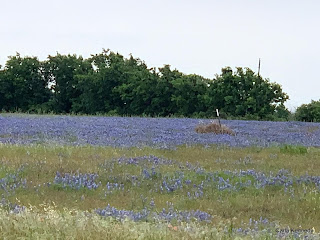 On Friday I spent the day down and out. I think the covid shot did me in. I was worthless but by Saturday I was finally feeling better Thank Goodness!
I go back for a follow up visit this Thursday the 29th with the Pain Management Doctor in the Woodlands which is about 1 3/4 hours from my house but I have plans for the day and it all works.
So that's it for now...
Until next blog...§  “Remember that happiness is a way of travel, not a destination.” ~Roy Goodman

I do hope this procedure brings you some relief! Congratuations of David's retirement! Now he's all YOURS!!!

Oh Carla, any day with surgery, outpatient or not is never fun. Hope you get to feeling better. I sure miss the bluebonnets here in Florida.