Saturday (8/21). I had to run to Bryan to get a Covid test so they would proceed with my lovely colonoscopy on the 24th. While I was getting my brain swabbed David was rounding up the cows to separate 2 young females born last year to trade with a guy coming in that afternoon.  It was an even swap. 2 females for two females. Well these little gals weren't so happy about being taken from their momma so they bellowed all night.

Sunday (8/22). Lilley as usual woke David up at 5:30am for breakfast. She hasn't retired apparently. Anyway David looked out the window and I heard him go "Damn It, well crap!". "I'm like what's the matter?" Apparently the new little black calf got through the barb wire fence out by the drive way and was walking in the flower bed right outside our front door. David kept thinking their cries sounded close and that was because they were..

David was gonna need help herding the calf so I got up and slid on my clothes. He was worried about me and my stupid knee but there was no way he was gonna get that calf back where it belongs without the other cows getting out. Team work. We did it less that 10 minutes. That will never happen again. LOL

The two new calves are in-separate able. So I've named them Thelma and Louise.. One is red and the other black.

That evening the moon was full so I went out to snap a picture. It never looks the same as it does to the naked eye when I take the picture. I try. But something I didn't notice until I was putting the pictures on the computer is that a line of fog was low and cutting through the trees. You can see the small tree to the right of the trailer in front but you can only see the top of the trees further away. It was weird looking. 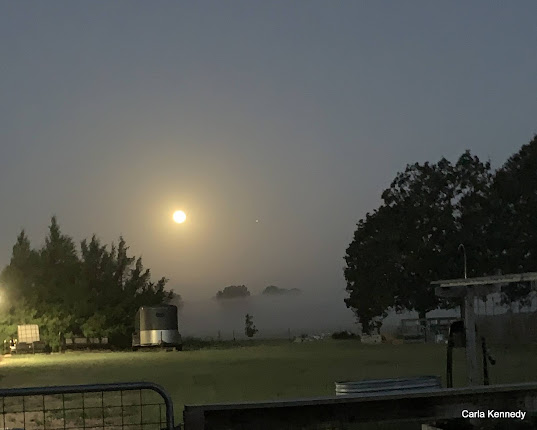 My sweet husband surprised me with a trip to the Piney Woods Wine Trail for our upcoming 43rd anniversary. Never knew there were so many wineries in East Texas and we're on a mission to check them out.
On Wednesday, September 1 we loaded up the car with bags and Lilley. She was going to stay with Pamela and her floofs while we're gone.
Our first stop was in Palestine, TX. We found a few antique stores to browse. Might have bought something at, at least one of them related to sewing. LOL.  We grabbed something to eat at The Old Magnolia sandwich shop. Not bad. From here we headed down the road to Tyler, TX. We were seeing lovely areas with hills and trees. David thought if we'd ventured over this way when we were looking for property we might have ended up in the Tyler area. 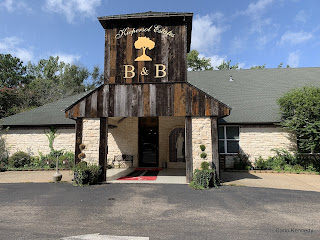 We made it to our B&B called Kiepersol Estates. At first we thought Siri was leading down a rabbit hole because we were entering a gated community. It was a beautiful area. About a mile and half down the road we saw a road to the winery so we knew we were on the right road. Another block down the road and there was the B&B. We were greeted by Tami who lead us to our room through the bar and part of the restaurant area. She gave a brief history of the area and showed us our room that even had a screened in patio. To bad it was to Hot to enjoy. 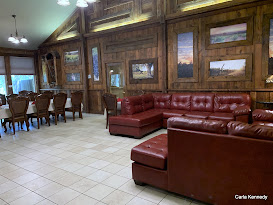 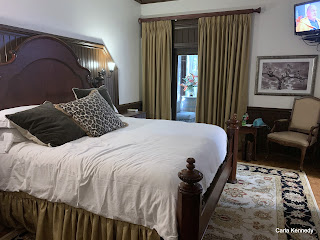 The room was beautiful and comfy. After getting settled in we headed to their vineyard and tasting room. They make wine, bourbon 100 proof and single barrel, vodka,gin, rum, and texuilla (they can't call it tequila). Today we started off tasting the various wines and ended with a pitcher of Sangria outside on the patio area. 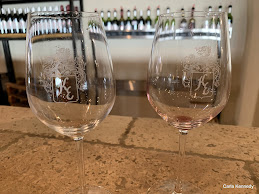 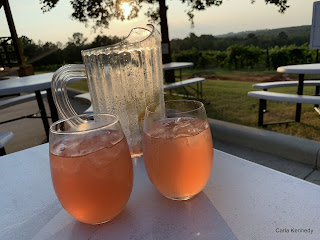 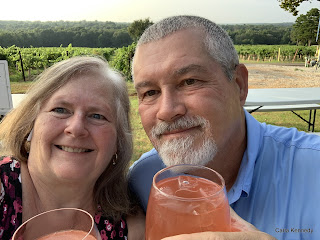 We closed them down at 7pm only after having a great conversation with one of ladies from behind the bar while we finished our Sangria. 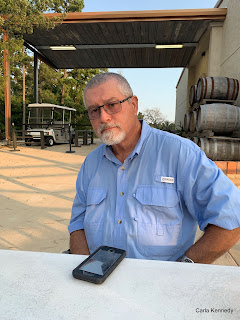 And this was the picture of David looking at me because I was starting to slur my words. What did he expect we hadn't had anything to eat since noon. LOL
I behaved honest.  We left here and drove into Jacksonville, TX to find the Commerce Street Draft House for food. He got a beer and I GOT tea.  I ordered their fish and chips while he got a hamburger. The food was really good. The place wasn't crowded but it was a Thursday. They have live music on Friday's it looked like so I'm guessing it would be crowded them.  We drove back to the B&B and as told the gates would be closed only the code to the gate wasn't working. Oh Great!  So David punched in the code several times and while doing so a resident drove up behind us. She asked us a few questions and proceeded to tell us her clicker for the gate didn't work either but thankfully her code did work so we got in. We stopped at the night clerks room to let them know the situation at the front gate.
Thursday (9/2). Breakfast came with our stay and Tami, the concierge told us to get the eggs benedict for breakfast and she didn't steer us wrong. The base was country potatoes, then beef tips and poached egg with hollandaise sauce.  OMG so freakin' good. Great way to start off our 43rd anniversary. Service was awesome and friendly.
After breakfast we headed in Tyler to go to the Tyler Rose Garden and Museum. Have you ever gone? There's 14 acres! Holy cow! 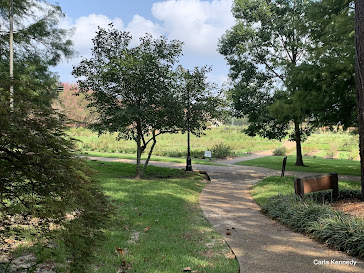 My knee rebelled but I got around part of it and viewed the rest from a distance. We were told the best time to come was in spring or October when the Roses were going strong. Plus right now they were still trying to recover from the freeze and replacing what they lost. Either way it was still beautiful to see but we do want to come back one October to see them in full force.  It's not all roses. There are azalea's and camellia's around plus other varieties of plants. 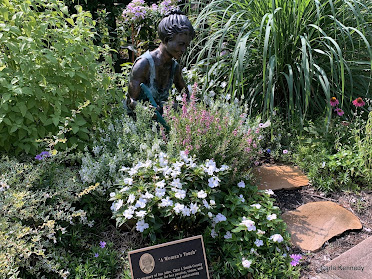 They also have an Idea Garden for those who want to create that perfect blend of flowers and greenery.
While wandering through the Idea Garden we saw this cool looking little guy. Check out the color of the tail.
The gardens had many areas to sit and relax. Of course it was as hot as Hell this day but on a spring or fall day I could see sitting out there enjoying the landscape while reading, listening to a book or just relaxing and enjoying nature. Hard to relax when it's hot though. LOL 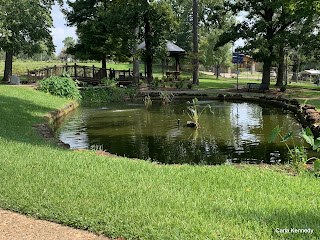 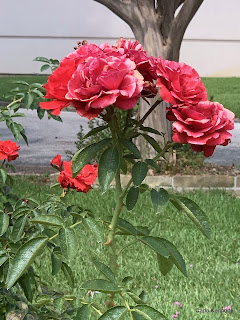 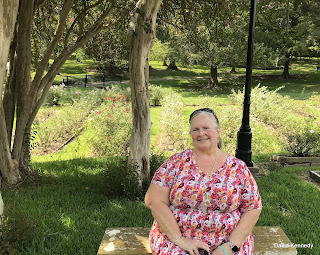 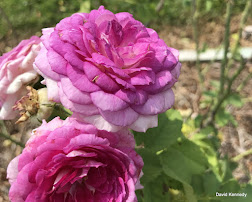 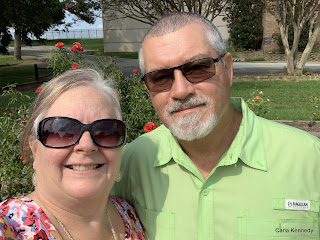 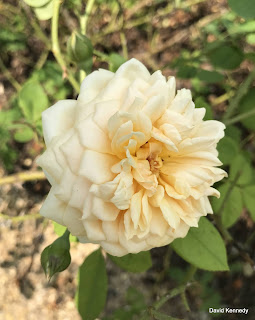 Oh while David was wondering through the roses I had to go to the restroom. They forgot to mention the water was off. I hit the soap dispenser then turned on the water. Uh no water and I have slimy soapy hands! You've got to be kidding! Just awesome so I used a paper towel to get as much of the soap off as I could. Thank goodness we had a bottle of water in the car so I could wash my hands good.
We weren't real hungry and never found a place we wanted to stop at going down the road to grab a snack so we drove on into Kilgore.
I'm gonna stop here and continue in another post.
Hope you enjoy the read and pictures. So far the anniversary trip was going great!
Until the next blog: 1.    “ A lifetime together is not enough for us we always find things to argue about…”

Carla! I love you guys and your adventures!