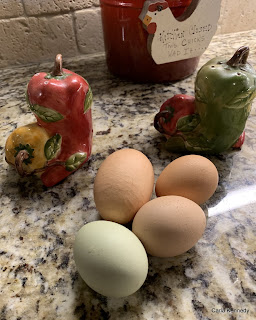 What a nice start to the year. Farm fresh eggs from the Harper Farm.. In the picture they look almost the same size but one closest to red salt pepper salt shaker is much bigger and it was a double yolker. Farm eggs tend to be richer in color. 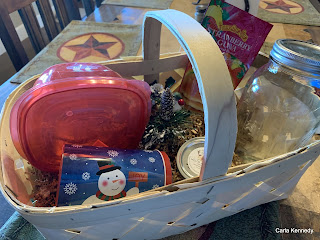 On January 2nd I grabbed a basket that was filled with goodies from our friends the Kennedy's. Everything was so tasty. It has Chex mix, Candied pecans, jalapeno' pepper jelly, Strawberry/Guava pancake mix and homemade wine/sangria. that Pamela and I finished off the day after Christmas..  I took Kelli & John some jam/brie cheese tarts.  We share a chicken with them. A teaser so they'll buy some farm raised chickens. All chicken and no water injected like the ones you get at the store. 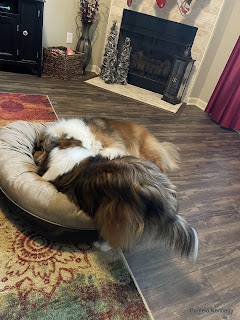 For the last 15 days Pamela didn't have a couch so she brought out the dog bed to see if the girls would use it.  It's been a funny journey.  First they laid next to it, then maybe drapped a paw other it, and played around and ran through it but on this day Sophie and Bri laid half in it playing.
On the 5th I went down to accept her furniture while she worked. It's really nice and comfy. I got to sit on it before she did. LOL 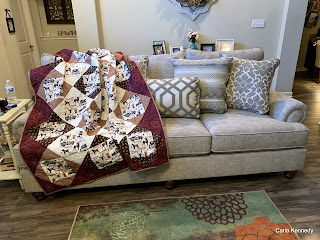 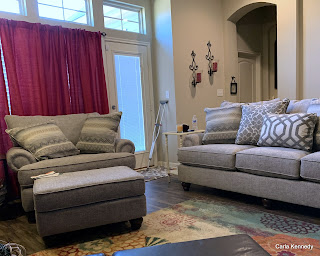 I couldn't move things around but I had the delivery guys set it up where it needed to be and got a picture of her Christmas Aggie Quilt on it. LOL 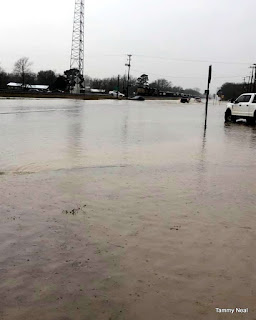 On Wednesday the 6th We got rain. Lots of it. And the craziest thing is Hwy 79 in downtown Gause.  Thanks to a neighbor Tammy Neal shared her pictures. There's no lake, pond or river close by. Just a low spot apparently. 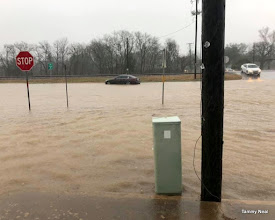 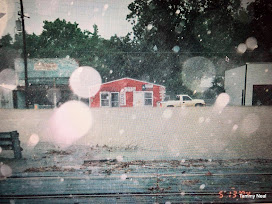 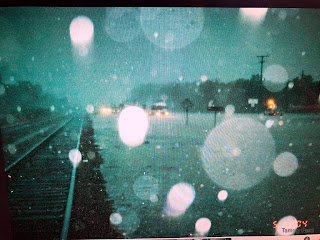 Thanks again Tammy for sharing the pictures and history. 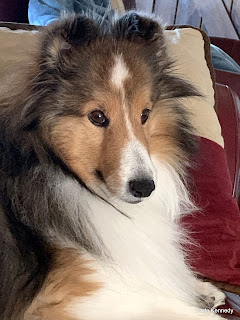 Maybe it was the weather I don't know but this little brat woke David up at 4:30 am to go potty and was ready for breakfast. Then she was ready to come get back in bed with me. Only at 7:30 I got up to have my coffee on the couch and she jumped up there to get comfy and go back to sleep. Look at that face. She rules..
This is gonna be a shorter blog today because the next one will be filled with white fluffy stuff. LOL
Until next blog....  “Blessed are those who can give without remembering and take without forgetting” ~ Elizabeth Bibesco