I went and got my hair cut Thursday (9/17) before I had to leave to go book club meeting back in Houston. I was in the chair and I said let's continue to embrace the gray and cut 2-3" off. My Stylist Gene asked if I was sure and he showed me how much he was gonna cut off. I decided what the hell .... Let's Cut off 4". It will grow back. Again he asked if I was sure and I said go for it and he did. Not sorry at all.

After my hair cut I drove to Bryan to Lone Star Quiltworks to spend money. YIKES. Bought me a Baby Lock Flouish II embroidery machine. I've been wanting one but wouldn't cut loose of the money but I guess this was a day of daring moves. First my hair and an embroidery machine. I've been trying to re-organize my sewing/office area and had to go a tad further to make a home for the machine.  Got it set up and now I need to play with it and get the hang of it. Isn't she purdy? 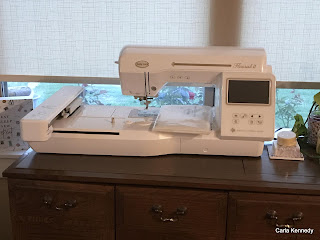 After making my purchase I drove to Pamela's to drop on my new machine. Didn't want to leave it in my car while at book club. 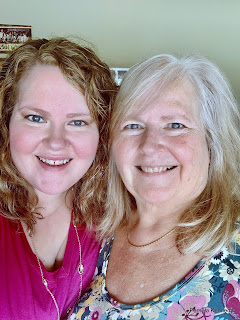 Pamela got put on call that day and by the time I had to leave for book club she could leave and go with me.  YAY. I haven't minded driving the hour and half each way but it was great having her company. Even enjoy her giving me a bad time.

We left her house between 4:30 & 5 to drive to the Spanish Flower Mexican Restaurant on I-45. Tonight was one of the largest turn outs we've had in a while. We were discussing the book Bluebird Bluebird by Attica Locke. This was quite a drive but the WTS Book Club was established in 1997. We've been together quite a while so it's hard to just leave my friends and good conversation just because I moved to the country. We normally only meet every other month but it's not in stone so sometimes they're closer together.

The story is based in East Texas and the main character is a Texas Ranger. There has been 2 murders in the small town of Lark. Darren, the Texas Ranger is intrigued and thinks the murders might have been racial motivated. It was a great book and provided lots of conversation. Of course this group never has a problem talking. Love'em all. 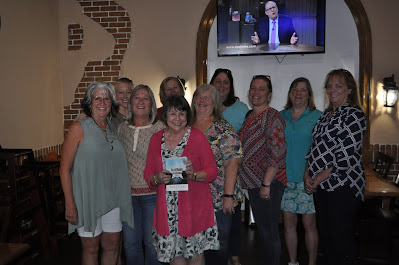 After the meeting we drove back to Pamela's and I spent the night since I had a doctor's appointment the next morning. I had an MRI on my left hip area to see if the could determine what is causing the pain I every morning for a couple hours after I wake up.

So the doctor says the tendon looks fine so my next step is get a cortisone shot but they'll need to ultra sound to make sure they don't hit the sciatic nerve. That would be nice. So now I have to wait another week for the doctor that can give that shot. Oh well what's a few more days. Now to go pick up my groceries and my bag and machine from Pamela's house and head back to the farm. 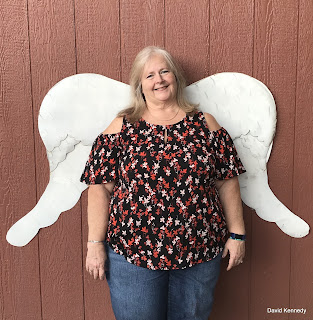 It was date night (Friday 9/18). We had tickets to see Josh and Kristi Grider at the Old Post Office in Caldwell.  We arrived early so we decided to walk around the corner to the Funky Junky to see what it's all about. They have a small antique shop with an outdoor area. They had live music that night and they also served food and beer. We hung there for a while and had a couple beers. The owners were super friendly. Would you believe if I sad they told me I was an Angel? LOL  I didn't think so.

The Halo is pretty tarnished trust me.
Next time we'll try out their food and stay longer. 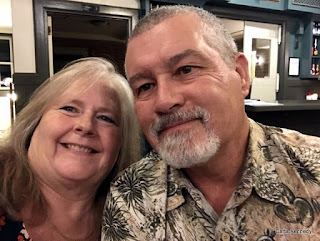 But it was getting close to 7:30 and we wanted to place our food order and be done eating by the time the music started. Plus we wanted to get a good table and we did. So we walked back around the corner to the Old Post Office. David wanted to try they're jalapeno grill fish and I got the salmon. The food was tasty. I will say the broccoli could have cooked just a minute longer but it had a good flavor. Next time we'll try the burgers. Josh and Kristi Grider were really good. We really enjoyed their music. They even had their 10 or 11 year old son come up and play the guitar and sing. He was pretty good too.

Saturday was a big day (9/19). My niece Shelby was getting married. It was gonna be a drive. Her wedding was in Seabrook which was a 2 hours and about 45 minutes away but we can't miss her wedding.  She was beautiful. The wedding was at the The Admiral over Sam's boat. It's a really nice venue.  She and her new husband Jorge Torres make a cute couple.

At the beginning of the night my hair was all fluffy but by 8 it was just curled. No fluff. But I'm really liking my new cut. 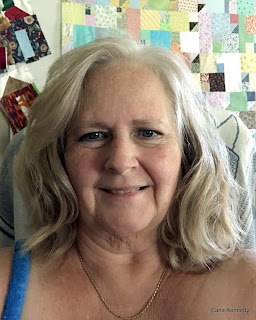 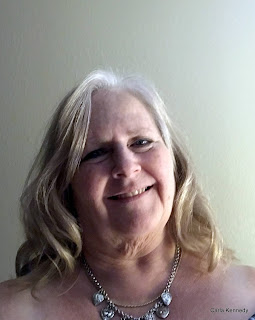 Prior to the wedding there were pictures being taken out on the balcony with water in the background.
Siblings: David, Glenda, and Gary(father of bride)         Pamela and Me 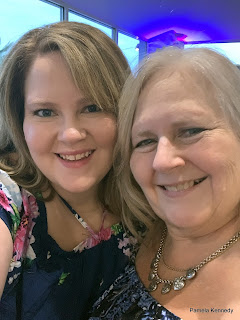 Pamela hanging with her cousins Phillip and Kevin then Aunt Glenda joined them. She's boy's mom 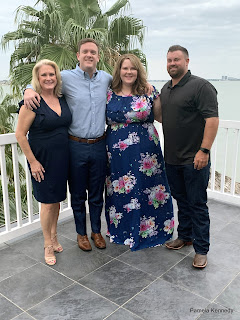 This is David's cousin Pam and her husband Brian. This is who our Pamela is named after. 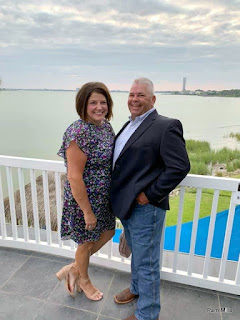 These two were so cute. They didn't smash the cake on each other until Me and a cousin said "What no cake in the face?" Then Shelby put icing in Jorge's nose and vice versa. 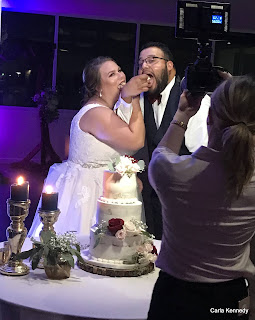 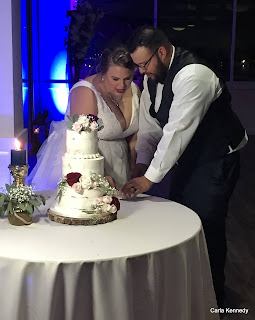 This was great. Shelby did a fake toss but then she turned around again and tossed the bouquet. Only it didn't make it to the single ladies. LOL! It ended up in ceiling light fixture. She took one of the bridesmaids bouquets and 3rd times the charm. Her little sister Kendall caught the bouquet. 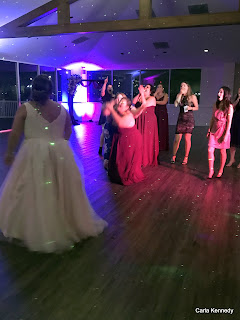 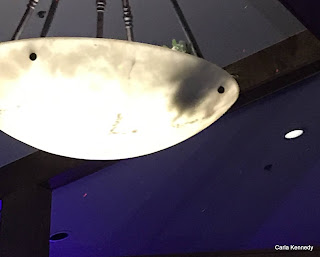 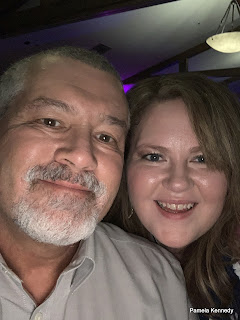 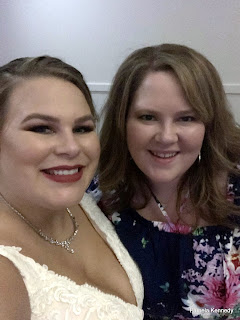 More Cousins Jordan and Nathan. Brother of the bride. Everyone had such a great time. 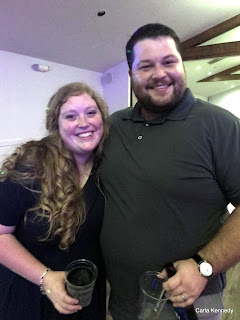 While at the wedding Pamela got a text from her friend Lauren. Lauren sent us a picture of Owen on the quilt I made her. Sew cute. It is always nice to receive pictures of the recipient with the quilt. It's nice knowing they are using the quilt. It's a great feeling. 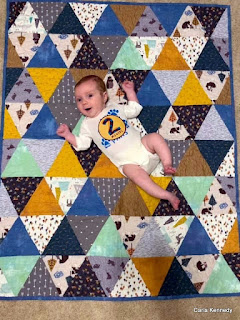 I noticed that I was on a sort of roll in my completed quilting projects but I slowed down dang it. I've completed 6 quilts this year so far and I'm working on one now that's not hard but several small pieces to sew back together. And why is it we cut up a perfectly good and beautiful piece of fabric into little shapes to sew it back together you ask... To make it new and be creative..  I need to get back to it.

Until next post...There is only one happiness in life, to love and be loved