Forgot to mention in my last blog that when we left Bartlesville, OK we had to make a detour. Our route had to be adjusted because the bridge was washed out.
And on Monday there was even more flooding in the Bartlesville area.  Glad we were already at Barb's by then.
On the road again Tuesday after a quick bite to eat with Barb.  Cresia had to go back to work so she wasn't able to join us. Those darn weather days messed with our plans. She was suppose to be off too many snow days required her to go back to work.

So Our next stop is Chillocothe, Missouri just down the road from my hometown.. It was a 3 hour drive and I definitely wanted to get there before any bad weather hit and they were predicting what else, more rain....  We ran into light rain showers about 10 miles out from Chillocothe. Glad we headed that way when we did because on Wednesday the highway we traveled on went under water sometime Wednesday evening.
Okay so I messed up... I didn't make reservations thinking it wouldn't be a problem but with all the rain people were getting off the road and all 3 of the Hotels were full and we ended up our last option...the Super 8 Motel which wasn't so Super. I've learned my lesson.  But at least we finally got a room.
After we got checked in I called my Cousin Gayle to see if she was at the Nursing home with her Mom and Dad. She and Ken were already headed back home but turned around and went back. So Pamela and I not only got to See Uncle Dick (my mom's brother) and Aunt Mary.... I got to see my cousin for the first time in almost 30 years and her significant other Ken, who I finally got to meet for the first time. So I was so excited in seeing everyone and with the pouring down rain I didn't take any pictures. Gayle did show a slide show of us as kids. Pamela got a kick out those with my curly hair. My gave me perms when I was little. It was time for Uncle Dick and Aunt Mary to go to dinner so I gave Gayle and Ken a ride back to their place and we talked and talked. It was still raining and I never pulled out my phone to take not one picture. I texted Gayle later cursing that neither of us took pictures. 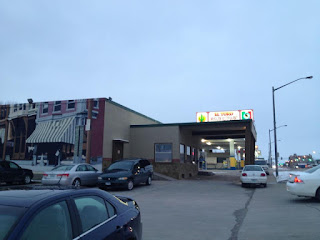 Talking about dinner. Pamela and I were meeting one of my nephew's and his family for dinner at El Toro a nice Mexican Restaurant in Chillocothe. My David compares all Enchiladas Verdes to this place. Who knew that this small town restaurant would make such an impression on David when he was there 3 years earlier. The buildings in the picture to the left are actually a mural. There are murals on almost every building with a blank brick wall. They're really pretty too.
I was batting 100 because again I didn't snap a picture.

We hadn't seen Zach, Bailey Jo or Carson in 3 years. And I got meet another new Great Nephew Preston. Again no pictures. Loser

But I got lucky because we all ended up at the Wal-Mart.  LOL and I snapped some pictures then. Top left is Zach with Pamela, Then Bailey Jo, I might have caught off guard,  Carson and his new little Brother Preston.
Not much left to do so we headed back to the hotel and called it a night. 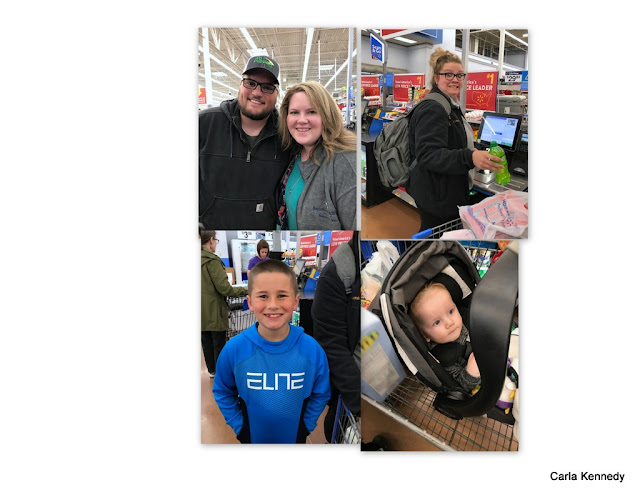 While we slept Tuesday night the tornado sirens were going off at my sister Barb's house and Cresia spent a few hours in the basement. Barbara was working in St. Louis and wasn't home.
On our way to the Hotel Pamela spotted a quilt shop. What? No way. I texted my Sister Nancy who is a new quilter if she knew it was there and she said no but would be checking it out next time she came to Chillocothe. She was bitten by the quilting bug and has been going to town on making some really cute quilts. Missed getting to see her. But then she was busy in Jefferson City, MO cleaning up after a tornado hit her office building Monday night. Geez all these tornadoes and rain.
Wednesday (6/22) was another day of travel but first we headed into my hometown of Trenton to visit my Dad and Carolyn's grave. On the way out of town  I tried to snap a picture of the quilt shop called Cuts N Bolts that we saw last night Only a car drove by just as I snapped the picture but I found a good one on-line.  It was closed of course last night and that morning then I might have peeked in the window. Had all kinds of pretty fabric. 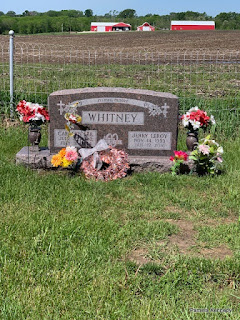 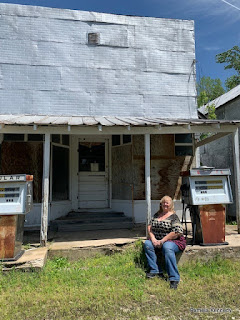 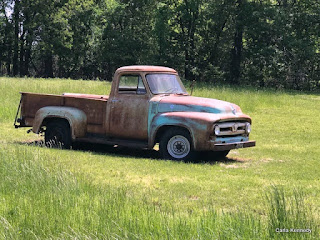 While driving to our next stop I took a picture of an old truck. I might have to blow it up and frame it. And then I looked up at the barn and saw a barn quilt. For those that might not know it's either a painted or a wood pieced sign of a quilt block. In some areas there is actually something called the Barn Quilt trail that will lead you to some historical site, shop or town. 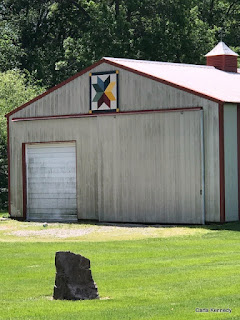 I would like to put one on our shed. The shed is what I used to call the mini mansion. We were working on fixing it up to sleep in before and while the house was being built but too many other things going on and we ended up always driving down to stay with Pamela. The mini mansion will now most likely become David's wood shop in time. 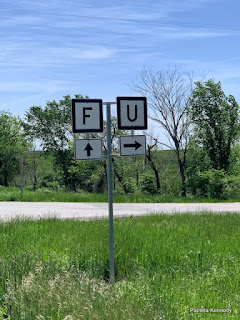 Now this is the picture Pamela wanted to go stand under and take a picture but the when she saw the Amish girl across the road holding a snake on a hoe she decided not to stand in the tall grass so she took the picture from the car.  We were just outside the town of Jamesport, MO.
It is the home of one of the strictest Amish colonies around this area.
You have to wonder if when naming these country roads they realized what they did. If so, someone definitely had a sense of humor..

Pamela took a great picture of the caboose that sits close to the town cafe. It has the best tenderloin sandwiches.
Joe (my stepfather) will be proud of this picture when he sees it. He's a railroad man and takes lots of  pictures of trains himself. Good ones too. 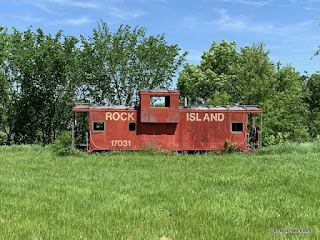 And guess where our next stop is before we head a 100 miles south to Overland Park, Kansas....!!! 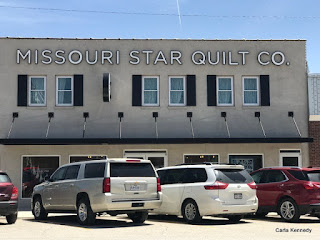 My happy place..... Just about 35 miles from my hometown is The Missouri Star Quilt Company!!  We didn't have a whole lot of time but we made into a few of the stores. Of course I didn't walk away empty handed but my wallet was lighter. LOL Jenny Doan the Owner and her family saved this town from becoming a ghost town. Buying one building at a time and turning it into a quilter's dream place to visit and even stay.
She has retreat house for quilters to stay and sew, take classes, see a show n tell by Jenny herself. That's on my bucket list. 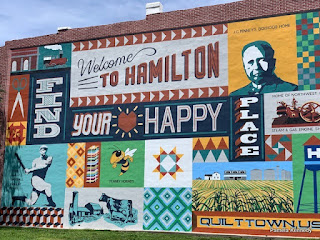 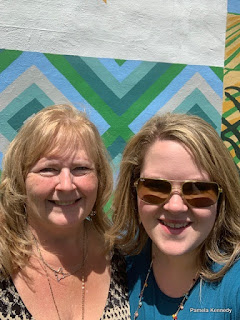 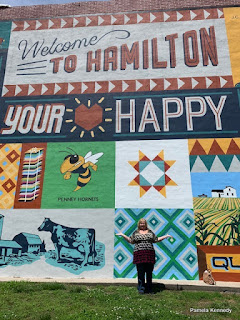 I have to say Thank You to my daughter for letting me interrupt our trip to stop in My happy place. I haven't gotten her interested in sewing/quilting but she does like it when she reaps the benefits of Mom quilting something for her.  LOL. So much eye candy and soft fluffy fabric, Do I have to leave..............
Out of time and we have another family member. My nephew Jeremiah flew out Wednesday morning for work but my niece Melissa and the kids are home and said to come on by.
But first we made a stop at Mercy Hospital to see my little sister Jerri Lynn. Due to various circumstances I had not seen or talked to her for almost two years. She was working that day so we went to her. Now we knew we wouldn't get to see her long because she had a breast feeding support group she had to manage but at least we got to see her and talk. A couple of the Mom's showed up while there but Jerri Lynn had us stay and introduced us and even put Pamela to work. It was a good visit. Wish it could have been longer. 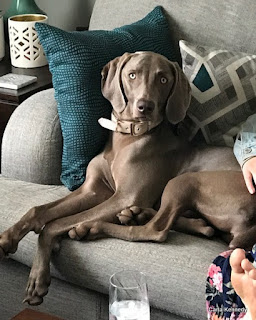 Next we headed to my nieces house but Pamela called Hannah (we'll call her my sweet inheited niece and our next place lay our heads) to let her know our where abouts. She told us she'd go with us to Jeremiah and Melissa's so come on by her house to drop off our things and she'll ride over with us.   When we arrived I got to meet Stella.. Isn't she pretty and those eyes? She covers the whole couch.

So now I get to meet my almost 1 year old great niece. Now she's a little cutie and always smiling. Well that's what I saw. Her Mom Melissa and Dad Jeremiah might say something different. 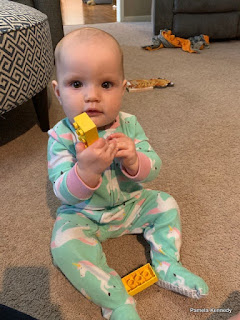 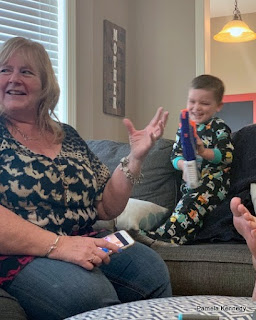 While there I got to get re-acquainted with her big brother Beckett. He's adorable. He had a nerf gun that Pamela promptly told him to shoot Aunt Carla. Of course he gladly complied. LOL 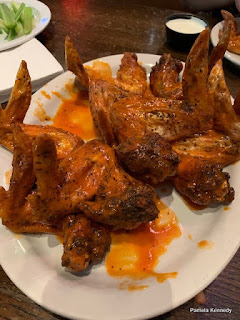 After our visit we ended the evening at I think it was called Peanuts not far from Hannah's house. We got an order of chicken wings. They were huge and so darn tasty. The 3 of us shared a dozen and had left overs.

Tomorrow Hannah has our itinerary all planned out. She planned it around none other than wineries, breweries and distilleries.

I will continue our adventures on my next post.
The fun with Hannah is about to begin.


So until next blog....“A good traveler has no fixed plans, and is not intent on arriving.” – Lao Tzu

Hey there! I'm at work surfing around your blog
from my new iphone 3gs! Just wanted to say I love reading through your blog and look forward to all your posts!

Keep up the outstanding work!